(Suez, Egypt) The ship is still very much stuck.

That ship, the Ever Given, is a massively-large container vessel traversing the Suez Canal in Egypt. At time of writing, the ship has been stuck for 4 days, 13 hours and 2 minutes and has created roughly $44 billion in global trade costs, according to istheshipstillstuck.com.

The ship lost power while traversing the Suez canal and embedded into one of the banks of the canal, blocking one of the busiest waterways in the world. Many other container vessels diverted around South Africa's Cape of Good Hope after waiting a few days to see if the ship could be refloated.

Despite the massive financial cost to the world, attempts to refloat the Ever Given have been unsuccessful so far. More elite dredging and digging teams as well as other highly-expensive options are being floated considered by the Suez Canal Authority (SCA). A spokesperson for the SCA had this to say:

"We recognize the ongoing impact to global trade is huge and we are doing our best to refloat and realign the Ever Given as soon as possible. We have dispatched our single digging backhoe. Additionally, we have entered into a contractual agreement with Clifford the Big Red Dog to provide digging services for the remainder of this crisis. Finally, we have added bumper rails along the length of the rest of the canal to ensure that something like this cannot happen again."

A spokesperson for Clifford confirmed the deal, saying "Clifford is excited for the work. He considers this the best and most important work of his life and will get to work right after he finishes his bone." 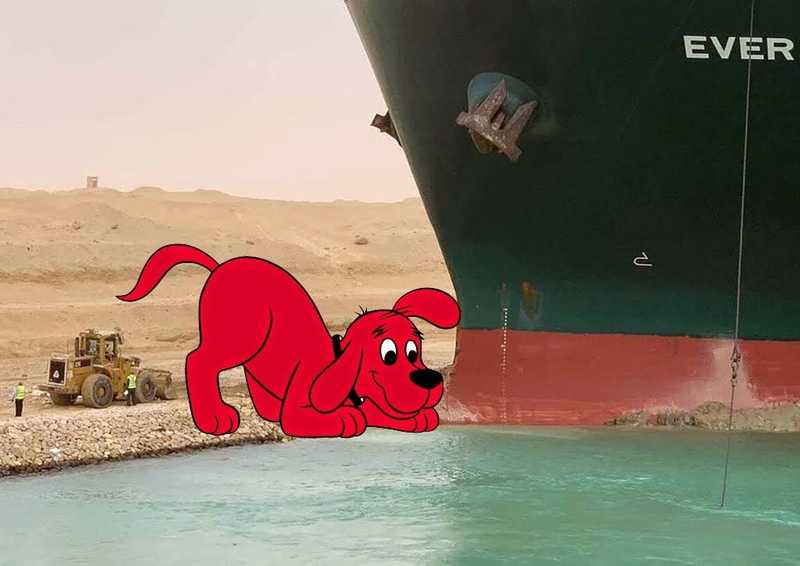 Robinhood to Re-brand as Sheriff of Nottingham Capital, LLC