San Francisco, CA - In a surprising move, Twitter has announced the launch of "Madlad Mode", a new subscription service that promises to bring users twice as many tweets from the one and only Elon Musk.

According to sources, the new service will give users access to an exclusive timeline featuring three times as many tweets from the Tesla and SpaceX CEO, as well as a host of other perks. "Madlad Mode is the ultimate way to experience all the Musk-ness that Twitter has to offer," said one Twitter spokesperson.

But the launch of Madlad Mode has not been without controversy. Many users have criticized the service as being too exclusive, and have accused Twitter of prioritizing the tweets of a single individual over the voices of the broader community.

"It's just not fair," said one user. "Why should we have to pay extra to see more tweets from Elon Musk? He already dominates the conversation on Twitter as it is. This just feels like a cash grab." 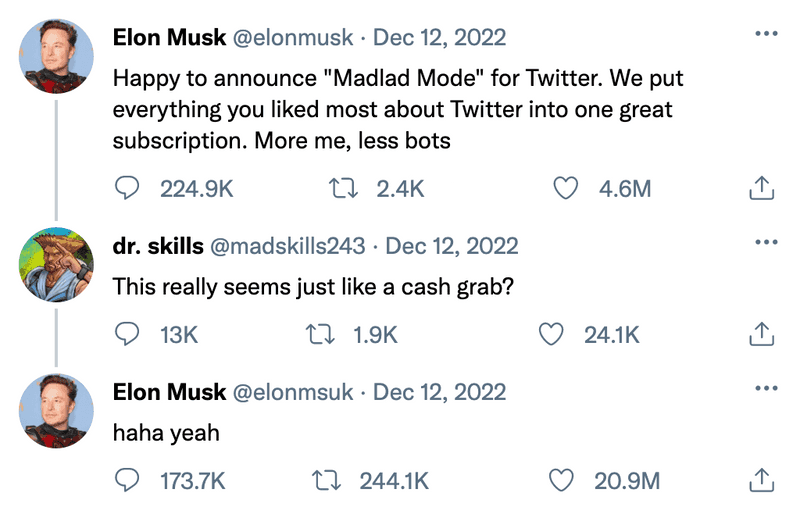 Despite the backlash, Twitter remains confident in the success of Madlad Mode. "We know that our users love Elon Musk, and we're confident that they'll be willing to pay extra to get even more of him on their timeline," said the spokesperson.

Only time will tell whether Madlad Mode will be a hit with users, but one thing is certain - the launch of the service has sparked a heated debate on the platform.

Twitter To Suspend All Users Who Have Other Social Profiles

Twitter Gives Ad Servers the Rest of the Year Off